During this time of celebration, joy, love, and giving, it’s appropriate that a friend of mine took me to a unique restaurant in Hamilton.  Called the 541 Eatery & Exchange, it’s a hidden gem in the city’s core (Barton Village).

Initially, I thought it was just a coffee shop/gathering place as it was bustling with activity and the delicious smells of home cooking all around.  Yet, this place was a bit different.  When we went up to order our meals, there were two large jars in front of the cash register.  Both contained a variety of buttons.

What makes this place so special is that not only can you get a great meal at a reasonable price, but you can also donate by paying it forward.  Prices for meals and fresh-baked goods range anywhere from $2.00 – $6.00.  While ordering your food you can, if you want, purchase buttons at $1.00 each and move them from the Pay It Forward jar to the Button Bank jar.

This program is all about giving to receive in a way that maintains the dignity of those who may not be able to afford such things.  Everyone orders from the same menu; eats and enjoys the same food.  As Executive Director Sue Carr says, “It’s a charity…but it is not a soup kitchen” (Hayes, 2017, April 3).

The restaurant staff are largely volunteers; even though their goal is to make a profit.  Profits that are then reinvested to offer more to those in need.

According to Hayes, the eatery is,

More than a restaurant, it is a unique social enterprise, fuelled by, and wholly dependent on, the generosity of the community.

Sitting at the harvest table, it was very clear that this place promotes the feeling of community and allows people to be social.  Whether people want a cheap, healthy meal, a coffee, muffin, or just to sit in charming surroundings and chat, it’s a great way to help change the area one button at a time.

As with all good things, there are those who argue it’s not the job of the community to help the disadvantaged.  Rather, the government should be solely responsible for this task.  What are your thoughts?  Do we need more places like this?

Buttons as currency?  Do you think buttons are a good way to help the disenfranchised in a community?  Or should it be up to the government to support those who can’t support themselves?

Social media has been a flurry over the last few months with numerous public allegations of sexual harassment, pointed largely at men.  The online uproar seems to have started in October of this year with Harvey Weinstein and has gained momentum with a new accused being added to the list, nearly on a weekly basis.  Notable names such as Kevin Spacey, Mark Halperin, Charlie Rose, Matt Lauer, Bill Cosby, Jian Ghomeshi….and the list goes on.

They’re not all from the entertainment industry, but in Media, Politics, Business.  It appears this type of behavior permeates our society.  But, has it always been this way or are we just noticing now and speaking out due to the pervasiveness of social media?

USA Today posted a timeline of Weinstein’s activities “Harvey Weinstein Timeline of Hollywood success and hidden abuse” https://usat.ly/2yjXRYT.  What’s interesting is that his harassment allegations date back to the late 1970s.  Yet, it doesn’t appear that they made much of a dent in his reputation at the time.  Fast forward 40 years and he’s nowhere to be found, reputation destroyed, thanks in large part to social media!

Christopher Knight wrote a piece in the LA Times on December 5, 2017, about a fiberglass sculpture of “an innocuous daybed” that in light of Weinstein’s behavior “became a casting couch.”  The artwork, titled “The Road to Hollywood…how some of us got here” immediately became controversial and was removed.  It has since been returned and is on display again. 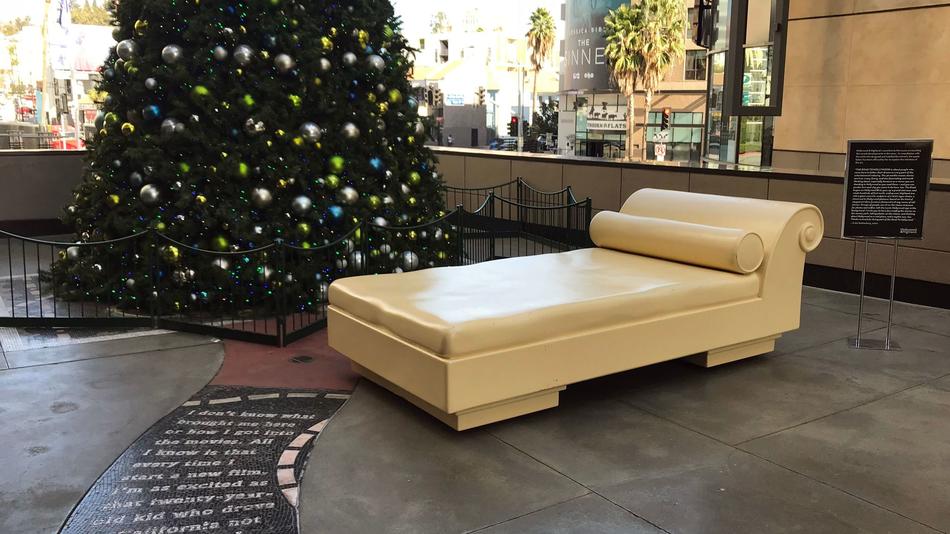 The Art Deco-style chaise in Erika Rothenberg’s 2001 installation “The Road to Hollywood,” removed in the wake of the Harvey Weinstein sexual assault accusations, has been returned to view at Hollywood & Highland. (Erika Rothenberg) 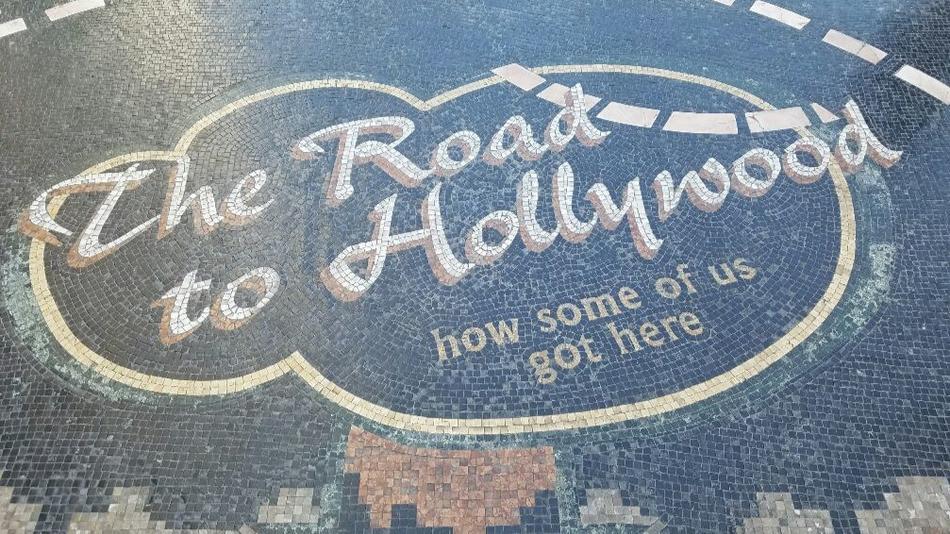 On the one hand, we’re hearing or reading about improprieties, on the other, we’re listening to or watching ads that continue to sexualized women.  I’m a bit confused about our duplicitous culture.  What does this say about our society?  Let me hear your thoughts.

Sexual harassment or a nice piece of art?  You be the judge on a daybed.  Click on the link and decide for yourself.  Do we live in a sexualized society?

Weinstein, daybed, artwork, sexual harassment – what do all these have in common? #sexualharassment #weinstein

The Lemming Condition (Arkin, 1976) is a children’s book that changed people’s perceptions of the group dynamic and independent thought.

It details the unusual “condition” of the lemming.  In the book, these rodent-like animals run like sheep over the cliff for no apparent reason.  One follows another, to a certain death, with no time for rational thought…Until one day one of them – Bubber – is asked the question of why?  The story is about Bubber as he begins to question for himself why his species does this.  When he realizes he can’t come up with an answer, he decides not to follow the herd.  Independent thought rules the day – great teaching moment for kids.

In reality, lemmings don’t really decide to commit mass suicide every so many years.  But, in 1958, Walt Disney produced a nature documentary called “White Wilderness” showing lemmings throwing themselves off cliffs – most to their deaths.  In 1996, David Mikkelson wrote about this on Snopes http://bit.ly/2zL5mKo and confirmed that producers actually staged these scenes after purchasing countless lemmings from various Inuit children.

For years, this was seen as being the truth because Walt Disney wouldn’t lie, would they?  We see such a strong comparison here with today’s ‘fake news.’  What can happen when something appears on Facebook or any other form of social media that causes an instant reaction?  Do we, as a species always apply critical thinking to all of our actions and reactions, particularly when we’re in a rush to respond before the next person?  I believe that a tool as powerful as social media has a tremendous power for negative and positive behaviour.

We must always filter what we read and say through OUR frame of reference to ensure the media responses we make align with OUR authentic values and codes of conduct.  This takes time and wise stewardship of our own time online.  I am not in favour of over control or overt censorship.  However, we must think first and then act, or we will be like the lemmings running off a cliff and believing Walt Disney’s production.  I believe rational thought will win the day when applied to social media and all other areas of human interaction.

How can we have independent thought when so much of social media centers on being part of a collective?  Are we all lemmings as we head toward the cliff along with the herd?

When was the last time you researched a post before responding?  Are lemmings fake news? #lemming #fakenews #herdmentality

Is it possible that there’s a strong connection between social media and the occurrence of vigilantism in the world?

Let’s face it.  Vigilante justice is nothing new; it’s been around for what seems like forever.  But, are we seeing an increase since the proliferation of social media?  I believe that there is a correlation between the two.  As it becomes easier for us to instantaneously communicate with one another, our reactions to this communication could also become incendiary.

Sites like Facebook, YouTube, etc. are providing a forum for vigilantes to not only talk about their actions but also post videos that will be implicating others online for all to see.  We’re so quick to share a post we’ve seen on Facebook where someone who’s been accused of a crime (falsely or not) is being sought.  I see Facebook as being the leader in this space simply because it has millions of users around the world along with its various vigilante groups.

VICE media is another example of this, specifically their ‘Creep Catchers’ series https://www.vice.com/en_ca/topic/creep-catchers, which exposes potential predators to its viewers.

One online video is by self-proclaimed vigilante Justin Payne, a construction worker from Toronto.

Justin focuses on shaming predators and I believe is legitimately concerned about the rise in online pedophilia.  He poses as an underage child, luring alleged predators into inappropriate conversations.  He then arranges to meet the supposed predator and exposes them with his cameraman and security guard close at hand.  These videos are then posted on YouTube i.e. Age of Consent https://www.youtube.com/watch?v=rJU_LvwL-Kc.

Mob Justice vs Rule of Law

The ramifications of this type of activity, without due process, can be severe and varied.  Innocent people can be falsely accused, with the potential to ruin not only their lives but their family members as well.

I believe that a fair society consists of the checks and balances of law.  When you’re in a society that has no respect for the checks and balances of justice and only have a mob mentality, then there’s no opportunity for proof or redemption.  Both of these are a fundamental part of our democratic society.  Trying to police the universe through the realm of social justice may come from a place of true concern.  However, when it’s wrong, the results are ruinous.

Rachel Kaser posted a blog on Social Media discussing the consequences of online vigilantism http://bit.ly/2iTks59.  She sums it up best in her final sentence

“Is exposing or shaming ten naughty people on social media really worth it if it means that even once, the righteous mob made an innocent person’s life worse?”

When reason and presumed innocence is discarded in favour of a vigilante mentality, disaster will surely follow.

This is happening in many areas of social media and must be taken seriously.  Due process and a clear understanding of the implications of social media are necessary to prevent mayhem and extreme and devastating damage – not only to people but to the ideals that are the bedrock of a democratic society.

I always believe that rational thought and proper protocols (legal or social) are there for a reason – to keep us safe among other things.  Social media, which is instantaneous, doesn’t necessarily allow time for rational thought to prevail.

I don’t discount the power of social media to move us to great things, but I do ask:

Let me know your thoughts.

Social media being used for mob justice is more common than you think and affects us in all walks of life.