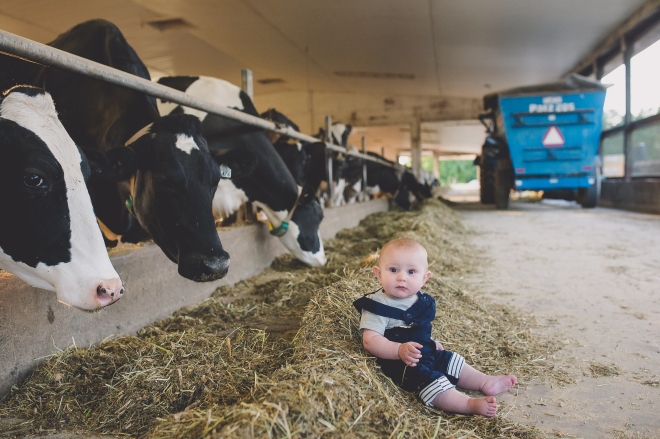 Growing up as a farm kid, on a dairy farm North of Toronto, I was exposed to the day-to-day of a farm, milking the cows, feeding the cows, helping pick rocks in the field, helping to load bales into the hay mow on a warm summer day. I took for granted the things I’d come to find as common place and everyday things were not those that many people were accustomed too. As my husband and I are raising our children (our youngest is pictured above) on our family dairy farm I see even more importance in sharing news about agriculture so that consumers understand more about where their food comes from.

As more and more of the population live in cities it is becoming increasingly important to share REAL news with people about how their food is made and where their food comes from. Social media is a great way to share information and to reach a larger platform to spread the word about a wide range of topics.

Recently, there has been a growing trend in Agriculture to share our stories and to be a voice for our industry to inform consumers of the great care farmers provide for their animals and the land. The term being an “Agvocate” was coined to encourage farmers to advocate for agriculture – it is important that consumers have a better insight into where their food comes from and the process food takes to get from the farm – to the store – to the table and then on to their fork.

In January, 2015 a Dairy Farmer from Middlesex County started a campaign  which he called #farm365. Andrew challenged himself to post a photo a day along with #farm365 on social media, so that consumers could follow along to see more about what happens on a real Canadian dairy farm.  The #farm365 project gained a large following and drew the attention of many news outlets, an article celebrating a year of the project was highlighted by Real Agriculture.  Andrew’s project allowed many people to get a greater sense of what happens day-to-day on a farm, however, it didn’t draw only positive attention, it also drew the attention of activists about animal rights who were critical of Andrew for producing dairy & meat products. The hashtag #farm365 was widely used on Twitter, Instagram and Facebook to share the message about Agriculture, farmers across the country began sharing their story and pictures from their farm using the same hashtag so that consumers could get a good picture of Canadian Agriculture.

Andrew’s first campaign on social media grew such a great awareness that he launched a second project in 2017, where he is visiting a different type of farm each week for a tour and to teach people about how a particular crop is grown or animal is raised and cared for. The first video of the series was a visit to a sheep farm. Andrew’s Facebook page  is the platform that he shares the videos on and they are also tweeted and retweeted on Facebook. If you as a consumer want to learn more about your food and where it comes from it is a great resource for interesting information.

Another great way for consumers to learn more about agriculture and food is by attending events hosted by groups like Farm & Food Care, each year they host an event called Breakfast on the Farm that is a great way for people to see a working farm and learn more from farmers that are producing the food they eat!

Social media has increased the ability to share a message with your audience, the ability to share information and get it out to such a large audience has improved farmer’s ability to Agvocate. I encourage you to consider following Andrew’s travels as he visits 52 farms this year – it is a great opportunity to learn more about where your food comes from.

Are you currently using social media to share your message about your business or your life? As a consumer are you interested in hearing more from farmers about where your food comes from?

Have you eaten today? Wondering more about where your food comes from? Hear more from farmers about how the food you eat is grown or raised! http://bit.ly/2qzEUNn

Where did the food you eat come from? Interested in finding out more? http://bit.ly/2qzEUNn #farmersfeedcities #ontag #food