Lately I’ve been so intrigued by people who have decided that home square footage is unimportant. I came across some of these ideas on Pinterest and now I’m addicted to learning more!

Since the recession, many folks have found themselves in a financial bind. They lost their jobs, homes, money, material assets. In lieu of giving up, they decided to “live small”. They purchased camper trailers and converted them into homes. They built small/efficient homes in lieu of traditional larger houses. I think it’s brilliant!

How much space does one really need? I read that in 1950, the average size of a home was 983 square feet; whereas in 2004, the average size was 2,340 square feet. Our family has a modest 1,200 square foot bungalow and four of us manage just fine – we finished the basement a couple of years ago to include a home office, laundry room and extra bedroom which all get used, but also finished space for a playroom and family room that are rarely used. What a waste of space and money!

I think that folks that have decided to “live small” whether by choice or circumstance are really on to something! The space is smaller, resulting in fewer costs for heating/cooling, hydro, taxes, cleaning etc. There is little space for “stuff”– just the necessities. I love the idea of living more simply.

Granted, most of these homes are built in warmer climates (think southern states) and may not be suitable for families that live through Canadian winters – the idea being that you can also use outdoor space as living space.

In my next life, I would love to take on building a small smart-house as a project. In particular, I would build this house – isn’t it just adorable?!

Some of the space saving ideas I came across to allow small spaces to work include: shelves on wheels for dry-goods beside the fridge (pantry), hanging kitchen utensils on the sides of cupboards, drawers under stairs, Murphy beds, and a lot of shelving.

For some people, down-sizing means that your lifestyle is freed up to focus on what really matters: time with family (less home maintenance), vacations and excursions, and living debt-free (the psychological benefits of being debt-free far outweigh bragging rights of living in “such and such a neighbourhood”, don’t you think?).

Imagine for a moment that you have a beautiful (small) home that offers you all of the comforts you require, along with money in the bank to do/buy whatever you want… isn’t that the purpose of tirelessly putting in 40+ hours a week at work? Isn’t work just a means to an end? But, if the majority of your paycheque is going to the bank to pay off your mortgage, taxes, utilities, etc., then I guess some folks must like their houses  a lot because it looks like that’s where they’ll have to spend the majority of their time. 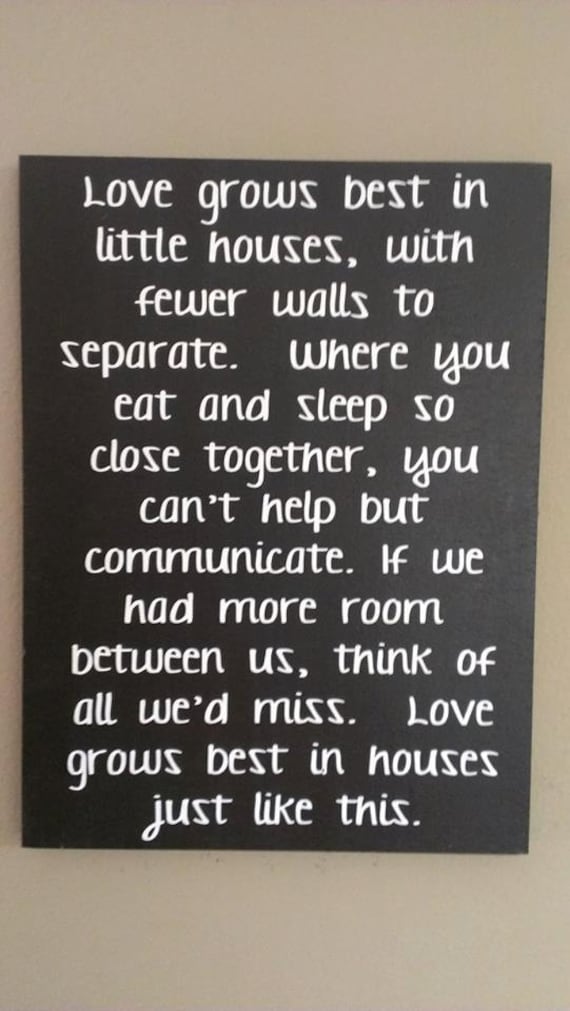 What are you thoughts on living more simply? Do you think you could downsize and still enjoy your home-life? Do you think that social media plays a role in educating us on how to live better/smarter/simpler?